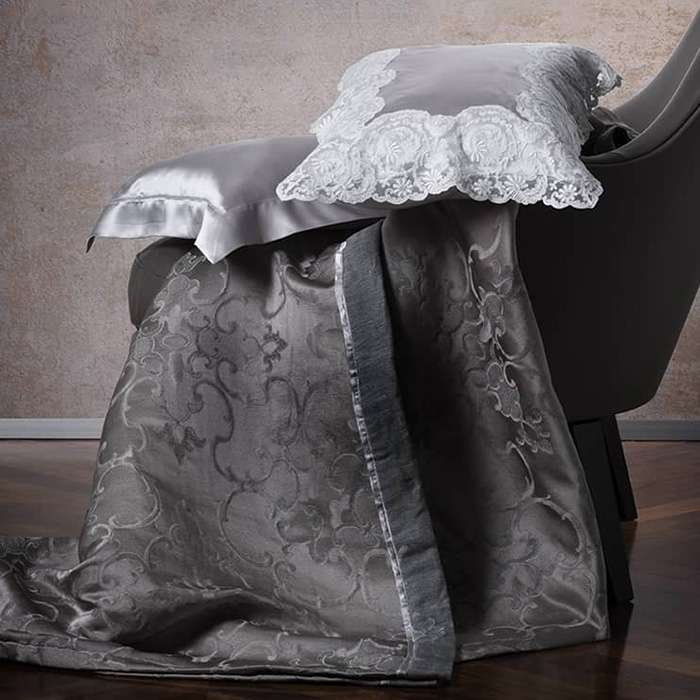 Luxury Lives in the Finest of Details
—

With quality, precision, and style, Dea fine linens add unique touches of beauty to your entire home. Dea embodies a proud tradition of high style and craftsmanship, utilizing time-honored techniques developed in Italy, to add joy and beauty to your home. From gorgeous bedding collections and bath linens to custom designs that can be tailored to your exclusive needs, every single detail is carefully thought out.

From precious lace to precise embroidery, Dea fine linens are as sophisticated as they are beautiful. Their fine luxury linens beg to be touched, looked at, and experienced. Dea’s fine Italian linens are sure to find a place among your most prized possessions.

Tradition, history, innovation and design… four words that sum up the cultural landscape of Italy. It’s a nation where beauty and quality are considered a heritage worth preserving and where know-how is a precious gift to hand down from generation to generation. And it is in Italy where Dea fine linens was born.

The story of Dea is the story of Dea Mantellassi, who since childhood cultivated her passion and fervor for top-quality linens. Dea was raised among embroideries and laces. As a young woman, she became a pupil of Evelina Bellini, one of the most famous and distinguished embroiderers, as well as the founder of one of the most prestigious designer labels in the world for household linens. In the mid-1960s, thanks to her charisma and abilities, Dea started producing and selling her own products, which were so successful that Dea soon created her first workshop, in the fertile Chianti area, famous for not only wine but also for its ancient embroideries. Many skilled artisans who specialized in this art were also located in Chianti. This was the beginning of what would become Dea.

In the 1970s, Dea’s two brothers began working for the company, Alfredo taking care of the financial and administrative duties and Franco handling commercial concerns. Meanwhile, more color was being added to the designs, as was automated processing. Soon, embroidery machines operated by human hands were working alongside traditional artisans, who of course remained a cornerstone of the company.

By the 1980s, Dea had begun to grow, and even more so in the 1990s, as Dea began expanding into international market. Dea’s daughter, Sabrina, who also grew up among laces and embroideries, joined the company, adding her experience and expertise in business management studies. Sabrina gave the family company an indelible imprint, guiding it deftly toward the internationalization of the brand. As the new millennium started, Dea established a new company: Dea USA. With that came the opening of Dea’s first American flagship store, in Palm Beach, Florida.

Innate talent, century-old tradition, a precious sense of beauty and a fantastic hand are the ingredients that give prestige and appeal to each Dea creation. Dea products are created from the careful selection of premium woven fabrics and precious threads that are consigned to powerful but sophisticated looms, which are able to weave precious cloths. They are then transferred to Dea’s Tuscan workshops for processing. In Tuscany, Dea Montellassi, as Dea’s design manager, is in charge of the delicate phases of the creation of the company’s masterpieces, such as the choice of fabrics, colors and designs.

The embroideries are created by skilled artisans, who have specialized in unique techniques handed down from generation to generation, passed on to the lucky heirs of an incomparable tradition. It is here that laces are applied and cut. The fabrics are un-threaded completely by hand, and rigorously handmade polka dots are formed.

Dea’s headquarters are defined by meticulous quality control. All products are ironed by hand, piece by piece, then folded and ironed again by dedicated machines before final packaging, often overseen personally by Madame Dea.

The Dea product line is the beautiful result of made-in-Italy strength, the soundness of a family-run company strongly tied to its territory, and a people animated by passion and talent throughout all divisions of the company. All Dea products are the fruits of a consolidated experience based on precious and unique artisan values that are also found in the company’s modern industrial lines.

Our staff loves Dea’s line of fine linens. And we will be happy to assist you in ordering and coordinating just the right combination for your unique needs.