Skip to content
The finest products, priced below retail every day. FREE shipping on orders of $100 or more.

The ABCs of Monogramming

The ABCs of Monogramming

“Monogramming is classic and graceful, not to mention rich with tradition. It’s the ultimate personalized luxury.”

Matouk, one of the world’s premier manufacturers of fine linens, recently profiled two Atlanta-area interior design experts, Jenny and Cam, and asked them to share their thoughts about monogrammed linens. Here, they outline their 7 surefire strategies for getting the most out of monogramming fine linens.

1. Less is More—When It Comes to Your Sheets, That Is

“If you want to monogram your bedding, simpler is a better choice,” says Jenny. “Go for white sheeting with a small element of color on a sham or a duvet. Matouk is one of the best products on the market for embroidery because the company does so many beautiful classic styles that are great for monogramming. We steer people in that direction if we know they want to have a personalized piece in their bedding.”

2. It’s All About That Placement

Are you going for a bold look or do you prefer understated? Do you want your monogram on shams? A coverlet? A duvet?

“We try to encourage one or two elements of your bedding to be monogrammed,” says Cam. “If a customer only wants one piece, then we suggest doing the shams and making the monogram big and bold. Unlike a flat duvet, shams sit up on the bed, so they make more of a statement when you walk into a room.

“If a customer wants both the duvet and shams, we encourage top center placement of the monogram in a smaller font on shams, and then a bigger monogram on the duvet.” 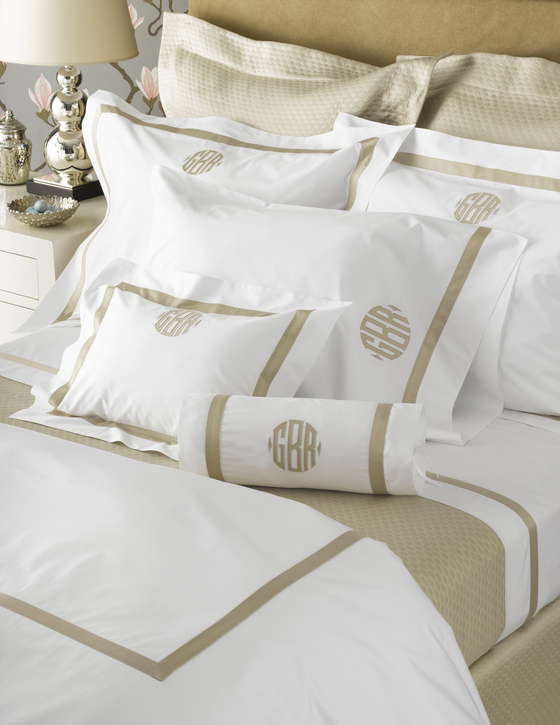 “Turns out certain letters lend themselves better to certain monogram styles. For example, notes Jenny, “the letters ‘J’ and ‘I’ can look very similar in a font that has a lot of flourish in it. Those letters look better in a more structured font because they can be more easily distinguished.”

“It used to be the protocol that when a man and woman would get married, they would use the woman’s initials on their monograms,” says Cam. “But now, etiquette is all over the map.”

Couples with different last names often use two different monograms on their shams. Says Cam: “If you’re worried about an asymmetric or inconsistent look, do a top center monogram in a smaller font and make all the letters one size.” 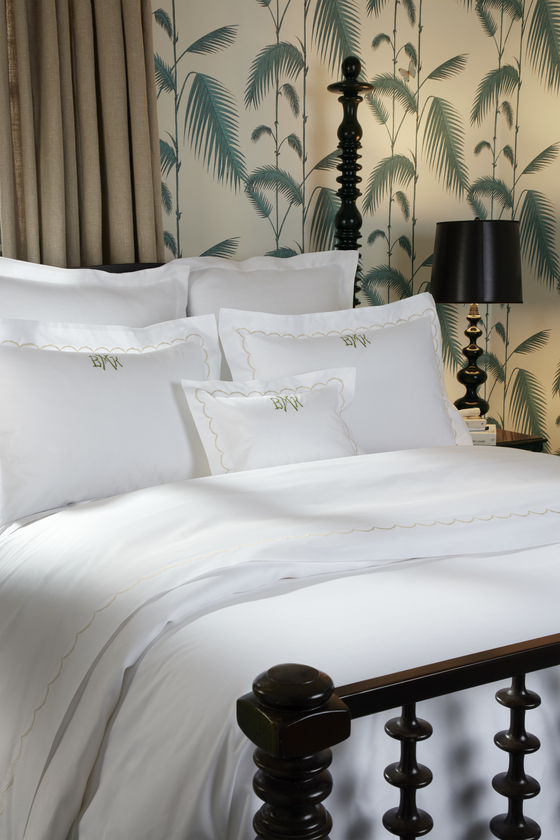 It’s not just choices about initials that have evolved over time. While monogramming has been a tradition for generations, trends still come and go. For example, customers used to regularly monogram sheet sets and tablecloths. But now, says Jenny, “They go for something more noticeable—top of bed pieces like duvets and shams as well as cocktail napkins and placemats for the table.”

When Cam and Jenny first opened their store seven years ago, many of their customers monogrammed coverlets. But that look has waned in favor of shams and duvets. “Shower curtains are hugely popular now, too,” adds Jenny. “People love the personalized look in their bathrooms.”

Speaking of bathrooms, Cam and Jenny urge consistency from the bedroom to the bath. “We’ll always encourage customers to choose the same monogram color and style in their bedroom and bathroom,” says Jenny.

“We’re big fans of monogramming hand towels,” says Cam. When you layer them over bath towels, they are what’s most visible.”

“Opal and light blue are very popular colors in the South,” notes Jenny. Ivory on white is becoming popular, as are gold tones. But most Gramercy customers still choose color. “Monogramming is a statement after all,” she says.

Are you ready to add your own personal touch to your home?

At Emissary Fine Linens, we offer a wide range of monogram fonts, colors, styles, and sizes.

Please consult with our knowledgeable and experienced store staff to identify the most appropriate monogram for your particular items and interior decor. We’re happy to help!